Our Cofion collection is a tribute to the Welsh culture; here with the Welsh ladies pattern illustrating the “super women” of Wales. This red colourway is inspired by our local heroine Jemima Nicholas who is said to have tricked French invaders into surrender. Indeed, in 1797 for the last attempted invasion, she told local women to dress in traditional red Welsh costumes to look like British soldiers. Armed with only a pitchfork, she has single-handedly rounded-up a dozen French troops who came ashore at Fishguard.

Finished with a simple hem on all four sides so you can choose to display either side. Light warm and easy to care for, it is made from 100% lambswool and has a pattern repeat of 3x9cm. 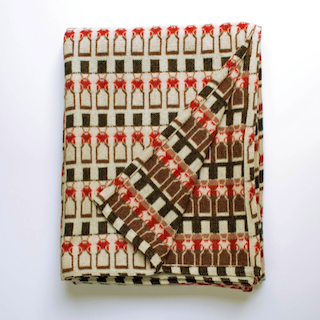